On Dec 1, 2017, I created my reddit acount, and started to join a crazy amount of subs. In one of them, r/GeometryIsNeat , I found a video under the name Procedurally generated symbols , and looking into the comments, I found the credited author: Inconvergent .

That’s what started it all. A rabbit hole that introduced me into what today is one of my favorite hobbies: generative art.

After finding r/generative , I started reading several artists blog posts about their environments. Most used Processing, some used Python, and others even Haskell.

I tried different ones until I found P5.js , which immediatle made me feel comfortable.

I loved the fact that you didn’t need to install anything. A simple text editor and a browser were enough.

After creating the mandatory index.html and importing a sketch.js script, I’d:

Then months passed, then more than a year, and my process was the exact same as when I started —Not that there’s anything wrong with that .

It was ok-ish. But could be improved by tightening the feedback between my changes and the new results.

Most of my artworks have aquired their “final” version after several revisions of the same idea. Final little “tweaks” that make me be at peace with the piece.

Just like the popular 80-20 rule, I was spending 20% of my time developing the core idea, and 80% just experimenting and making tiny adjustments that eventually produced the final work.

That’s when my workflow started to get in the way of creativity.

If I wanted to try different values to some constants, I’d have to modify them in hard code, save, and refresh. Only to decide which constants to or not to modify next.

This produced a bottleneck that limited me while exploring the whole range of constant combinations.

I’m reluctant to call the page I had at the time a “portfolio”. It wasn’t.

It was the simplest HTML page with hard coded links to the different artworks. 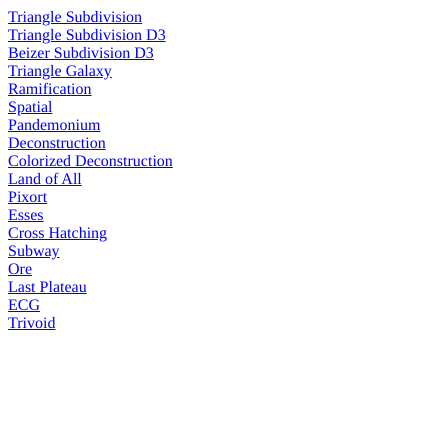 I definetely wanted to have something different. A nicer page that at least showed some artwork information (such as the date of publication), and my social links.

The bottleneck issue made me aim to create a space to interact visually with the code constants, so I wouldn’t need to modify the code anymore.

I had seen similar things before.

GASP Gallery also features a set of UI controls for the artworks.

But I also wanted to solve the portfolio problem.

At the end, I decided to create a framework that’d also serve as a static content generator.

Its task would be to build an individual experimentation space for every work, and concentrate all of them in a single home page.

The produced websites would be as easy to publish as it currently is to share a Jekyll or Hugo website.

It’d also be useful to other artists using JavaScript to generate art.

It’d be easy to modify and extend, using a templating engine and custom themes.

Well… all these ideas gave birth to Ginpar , and I’m pretty excited about the current results, and future development of it.

I’ve been using it experimentaly and it really sped up my process.